“The food system is the single biggest threat to nature today,” asserts the World Wildlife Foundation. “It uses 69% of all our water and 34% of our land. It has caused 75% of deforestation, 30% of topsoil erosion and contributes at least 24% of greenhouse gas emissions.”

As we have learned more about the environmental impact of the food system, there’s been a worldwide push for increased sustainability and waste reduction. We all want to be “green” and environmentally friendly, right? But one of the biggest areas of waste is one which nearly all of us regularly contribute to - food waste!

Take a quick guess...what percentage of food that you buy do you think you waste each year? People tend to underestimate how much they throw out, especially since that waste occurs not only in our homes but in restaurants, hotels, hospitals, schools, etc.

Between things like buying groceries in higher quantities than we can use before they go bad and being served larger portions than we can finish, about one third of the food that’s produced globally is never even eaten. 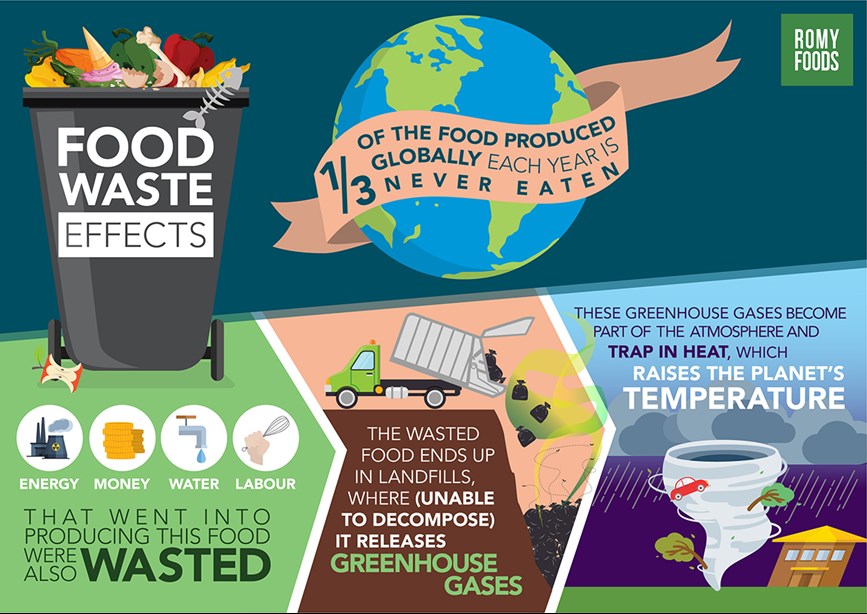 So what does that amount to? According to the Food and Agriculture Organization of the United Nations, “Per capita waste by consumers is between 95-115 kg a year in Europe and North America.” It’s likely that you’re literally wasting your weight in food each year!

First, let’s consider the financial implications. With so much food waste across the globe, we’re throwing away nearly €900 billion worth of food each year! Nearly a sixth of that comes from Europe alone.

The ecological implications are equally jarring. Most people don’t give a lot of thought to organic waste (like food) filling up landfills, because it will just decompose...right? Actually, food waste does NOT readily decompose in landfills. The process of decomposition requires air, and when the waste is all piled up in plastic bags and packed tightly together, the air can’t reach it.

What’s worse, since the organics can’t decompose they release methane - a much more powerful greenhouse gas than carbon dioxide. Considering that we waste approximately 1.3 billion tonnes of food each year globally, it’s not difficult to imagine the impact that food waste has on climate change.

Food loss - another avenue of waste

Food waste is bad enough, but we also have to combat the problem of food loss. Food loss refers to food that is produced for human consumption, but is ultimately deemed unfit for sale. Much of the food that’s produced globally doesn’t even make it to markets or kitchens in the first place!

While food waste is predominantly an issue in industrialized countries, food loss is more of an issue for developing nations, where a lack of sufficient finances, technology, infrastructure and training is an impediment to growing healthy crops and delivering a full yield.

Additional complications arise when it comes to the storage, packaging and transportation of harvested crops. Raw goods have to travel over long distances from farms to the markets, and they’re subject to shifting, squashing, and spoilage all along the way.

Many food producers lack the ability to maintain a proper temperature during transportation (which is especially key since many food producers are located in hot and humid environments), so a lot of the food is transported for no reason - it is unusable by the time it arrives.

These are obviously big problems, especially since they cause planetwide damage through deforestation, global warming and more. But what can we do about it?

A key piece of the solution to both food loss and food waste is to shift the focus to mass-produced frozen ready meals. Here’s why:

A study published in the British Food Journal explored the connection between food preservation methods and food waste. Their findings? “The results show food waste can be reduced by six-fold when frozen foods are compared with fresh foods.” Using simple freezing technology is a more sustainable and cost effective solution, especially considering that the alternative is to simply produce larger crop yields to compensate for predicted food loss.

And by increasing shelf life and using proper portioning in ready meals, food waste is dramatically reduced both at home and across the entire foodservice industry; from restaurants to hotels, schools, care homes, hospitals, correctional facilities, golf resorts and anywhere else that aims to serve plated meals. Frozen ready meals are good for the environment!

At Romy Foods, we operate under a zero food waste vision.

Helping to create a healthier planet is a big part of the reason Romy Foods was founded, and it remains a core company value. By creating a system to provide frozen ready meals in patented Torus Pak® packaging, Romy Foods is actively engaged in reducing food waste and food loss.

That value not only manifests itself in the form of financial savings; it also conserves water and energy from production, reduces greenhouse gas emissions from food waste, and even protects biodiversity and limits deforestation by improving the efficiency of agricultural land. We believe that affordable, plated meals should not come at the cost of our environment.